This is the home of non-commercial writing I've done under the name Vashtan.

Like many writers, I have written a great deal of things that will never be published commercially. Whatever the reason - if it was just writing for writing's sake, love for characters that aren't your own, or a creative exercise to flex those writing muscles without obligation or publication pressure. All this work is not-for-profit and solely for fun. These are written under the pen name Vashtan. 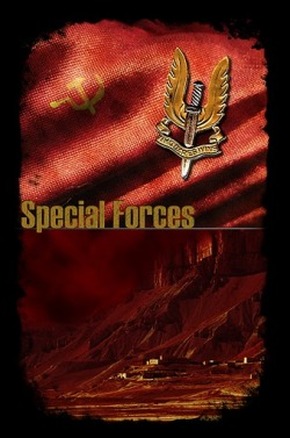 The three cycles Soldiers, Mercenaries, and Veterans were written between April 2006 and November 2008 and have 70 chapters in total, comprising around one million words (the equivalent of around 15 full-sized novels). It is only suitable for an adult audience.

This is the epic story of a Soviet Spetsnaz soldier and a Scottish SAS soldier. Vadim Krasnorada and Dan McFadyen are two enemies who meet in the line of duty during the early days of the Soviet Union's last war in Afghanistan. Behind enemy lines respect and finally love grow...but that's only the official version.

The reality of these two men is dark, brutal, fuelled by aggression and insane lust. Steeped in pain and killing, these Special Forces soldiers meet in 1980. Their intense hatred caused by rape, revenge and torture turns into fucked-up lust and years of secret encounters in the dangerous labyrinth of Kabul and the Afghan mountains. Time, despair and desolation smoothe down the sharpness of hatred, its venom drained with each physical encounter; lust helps to form an understanding that only two men of the same kind can share.

This novel spans across over twenty-five years of their lives. It's harsh and violent, but life is cruel and they just do what they need to survive.

Special Forces is available in both the "original version" published between 2006 and 2008, and an edited version ("Vashtan's Preferred Text"). Find the original files below.